After a year’s hiatus, Performance Works NorthWest is back with Cabaret Boris & Natasha, your favorite amalgam of amazing artistry and kittenish kitsch. This beloved long-running arts salon, named after PWNW feline mascots, Boris & Natasha (R.I.P.), offers a foretaste of summer excess with dance, music, and video from an exceptional pool of Portland artists, plus fun snacks and drink. 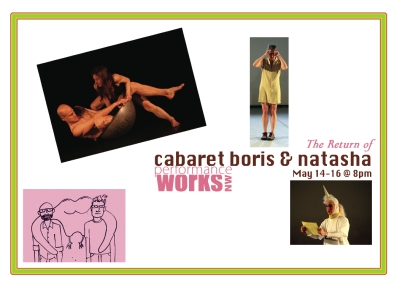 AND the most famous all-male, untrained dance troupe in the universe, The Boris & Natasha Dancers–graced this season by the inimitable moves of Josh Billeter, Thomas Lauderdale, and Nate Overmeyer.

ANNE FURFEY’s “Monkey Riot” is a dance-in-progress playing with the ideas of permanence and the edges that try and hold it. Anne continues to create, perform and produce dance in Portland, as well as, in the past, in such cities as Boston, and Denver. Besides choreographing her own work, she recently produced “The Portland Project” for PWNW’s Alembic Series, and performed in Linda Austin and Seth Nehil’s newest collaborative work Bandage a Knife. During the day, Anne can be found working as an Occupational Therapist.

CARLA MANN & JIM McGINN present the whimsical and disturbing “I Dreamed I Lived with Elvis Presley”, navigating an alternate reality of not-entirely-domestic bliss.
Carla Mann amuses herself by choreographing, performing and teaching contemporary dance, something she has done since 1983. Happy distractions—creating site-specific work, dance video installations and choreography for the theater and concert stage—fill gladful hours, as do performing with the incomparable Jim McGinn and with the sterling members of Minh Tran & Company, and relishing fond memories of working with  tEEth, Oslund+Co/Dance, Collage Dance Theatre, Bonnie Merrill and Dance Gatherer among others. Chairing the Dance Department at Reed College, where she has taught since 1995, is an endless diversion, her students a delight…Jim McGinn is so happy to get to dance with Carla Mann and grateful to those who support PWNW.

SUSTENTACULA is a band. It is peopled by Ryan Stuewe (pronounced stee-vee) and David Rafn (pronounced mega-cat). Ryan plays drums and creates loops. David sings/poeticizes and programs computer sounds. Their piece is titled: “Political Comedy, Magic, and Reggae” It will probably be a musical exploration of something reprehensibly funky yet lasciviously thought provoking.
www.myspace.com/sustentacula www.davidrafn.com www.myspace.com/ifsh

TAYLOR A. YOUNG + SARA NAEGELIN + LEAH WILMOTH collaborate for “Hunch,” an excerpt from the evening-length work Tinnitus, premiering June 25-27 at The Plant (939 SE Alder St). The dance explores the curious ways in which we consciously and unconsciously embody the ghosts of sounds that haunt us daily.
Sara Naegelin has danced her way through life and has the feet to prove it…Leah Wilmoth has been involved in the arts all her life. She loves witnessing and being a part of creative collaborations…During his tenure in Portland, Taylor Young has performed in new work by Gregg Bielemeier, Paige McKinney, Katrina O’Brien, Mary Oslund, and POV Dance. He’s delighted now to be collaborating with Sara and Leah, generating movement he can call his own.

Josh Billeter is a Portland native who works at Bamboo Revolution and is a board member of Voice for Oregon Innovation & Sustainability (VOIS). When not pimping bamboo, he and his wife, Jennifer Yocom, enjoy the outdoors, music, film, local culture and general shenanigan…Thomas Lauderdale is bandleader/pianist for the “rollicking around-the-world musical adventure known as Pink Martini…Nate Overmeyer was born and raised in a separatist doomsday cult in the Ozark Mountains. He escaped at fourteen, spending eight years in California as a printmaker and environmental compliance technician before coming to Oregon to pursue a career in snowboarding. Nate has studied art at PNCA, architecture at The University of Oregon, and art history at Portland State University. Nate is also a singer and percussionist. As a studio musician, he has worked with artists such as Larry Norman and Pink Martini. He is a member of The Flash Choir, and a hootenanny group called The Stumptown Family Ramblers. He lives in Portland with his partner, Sarah, and their four dogs.