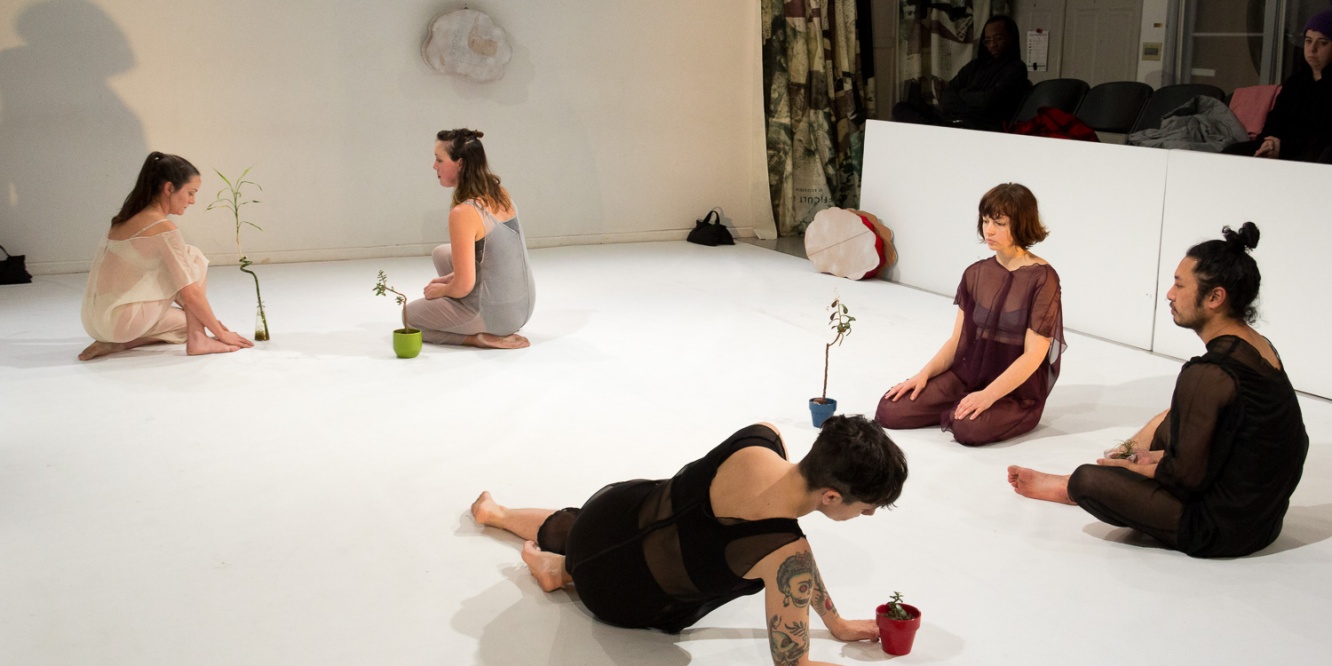 —3 miles of possible, a durational solo. The dancer animates and travels a series of spatial paths envisioned as giant drawings and/or runes. When completed, the trajectory will total three miles. It will take as long as it takes. It will invite interruptions and annotations that touch on utopian fictions, possible world theory, modal logics, and more. A work-in-progress performance—the first mile—is coming up at PWNW in October 2021 for a series of 7 late afternoon performances for very small audiences. Information about tickets HERE.

—/ə ˈsɪŋgəl pɪŋk klɑʊd/ collaborative work with Allie Hankins. originally slated for June 2020 but postponed due to COVID-19. An online adaptation was screened in March 2021. Premiering March 17-26 at PWNW.

Linda Austin, co-founder & director of Performance Works NorthWest in Portland, Oregon, has been making dance and performance since 1983, often with a strong visual element and a commitment to commissioning original music. Her working process exploits and explores the body’s powers and limits, bringing each performer’s vulnerabilities and strengths, accidental awkwardness and elegance, into a web of relationships—intimate, playful, confrontational—with other bodies, objects, environment, sound and media. The resultant improvisational and/or highly choreographed works are non-linear, poetic, often laced with humor, deploying movement that often disrupts what is generally considered “dancerly.”

With a background originally in theater, Linda Austin began making performance and dance in 1983, when her first piece was presented at the Danspace Project at St. Mark’s Church. As an active participant in the downtown New York dance and performance community until 1998, Austin presented work at Performance Space 122, the Danspace Project, the Kitchen, and Movement Research at Judson Church. From 1992 to 1994 she lived and made work in Mexico, returning in Mexico City in 1998 for a two-month residency sponsored by Movement Research and funded by the U.S./Mexico Culture Fund.

In 1998, needing a more expansive and stable environment for the creation of work, Austin moved to Portland, Oregon, bought a small church which became her studio and, with lighting designer Jeff Forbes, founded the performing arts non-profit Performance Works Northwest. PWNW serves as parent organization for Linda Austin Dance as well as the catalyst for other projects such as the 2008 Tuning Project, curated by Karen Nelson, which brought Tuning Score innovator Lisa Nelson and Contact Improvisation founder Steve Paxton, to work intensively with a group of talented dancer/improvisors from around the country. Since her move back to the west coast, Austin’s performance has  been presented at PWNW, Conduit, On the Boards’ Northwest New Works, Velocity, and PICA’s TBA Festival, while making occasional forays back to NYC.

Awards include the Foundation for Contemporary Arts Merce Cunningham Award (2017), a Fellowship in Performing Arts from the Regional Arts & Culture Council (2014), as well as Fellowships from the New York Foundation for the Arts (1992) and the Oregon Arts Commission (2007 & 2019). Her work has been supported by the Regional Arts & Culture Council, the Paul G. Allen Family Foundation, and Movement Research, as well as residencies at the Ucross Foundation, Djerassi and Robert Wilson’s Watermill Center. Her writing has appeared in The Movement Research Performance Journal, Tierra Adentro (Mexico), the literary journal FO A RM and a 2003 collection from MIT Press, Women, Art & Technology.

the ARTIST STATEMENT
JOSTLE: I delight in and am provoked by how my dance practices and obsessions jostle against each other, never settling into a singular vision. My work deploys movement, sound, text, visuals, and props to create non-linear, poetic works laced with an eccentric wit, teetering on the edge between the immediately apprehensible and resolutely mysterious.

SYSTEMS: Dreaming up systems, prompts, and scores of the same “shape” as the material or questions I am researching is both imperative and fun.

DANCE: Even with scant technical training, and whether a piece involves talking, moving, prancing with pants around ankles, or towing a fur-edged railway tie across the floor—I claim it all as dance.

VIRTUOSITY: Sidestepping the allure of a conventional virtuosity, my work includes the virtuosity of the everyday, the awkward, the inappropriate, as well as other visible and invisible virtuosities that fall both inside and outside what is understood as “dancing.”

BODY: Whether I am teasing out a body’s history, social or political context; placing the body alongside objects and media; negotiating a relationship with music; or engaged in a poeto-scientific study of movement and perception—all manifestations that arise are consciously articulated though the individual body and agency of each performer.